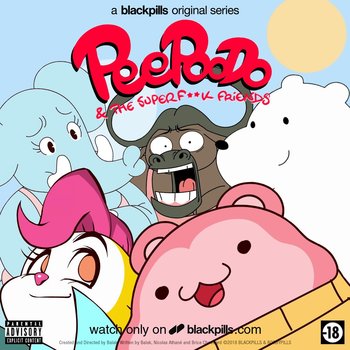 About as SFW as it's going to get.
"My name is Peepoodo, I like to sing on sunny days!
It's so exciting too, when all my friends come out to play
Each day brings mystery, and adventures all the way
OH wowee, I can't wait to see whatever's coming next!"
— The English theme song
Advertisement:

Don't let the thumbnail fool you, this cartoon is NOT for kids.

Peepoodo & the Super Fuck Friends (stylized as Peepoodo and the Superf**k Friends, and changed to Peepoodo & the Super Space Friends in season 2) is a French adult animated series created by animator Balak (co-creator of Les Kassos and Last Man) for the Blackpills app that parodies the typical Edutainment Show in a hilariously NSFW way. And we do mean NSFW; it revolves around Funny Animal characters who constantly have their junk hanging out, and every episode has another extremely sexual topic. You may need a shower after watching, that's for sure.

The first season was first released July 16, 2018 in French, and spanned 18 episodes. The English dub was released May 2, 2019 on the official website

was made for pitching a second season with 8 episodes, and the first episode of it was eventually released on April 7, 2021.