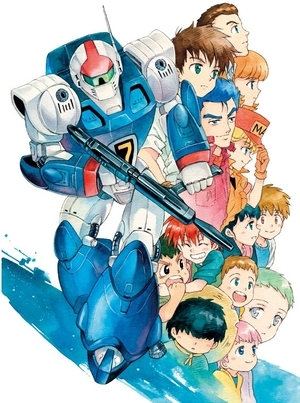 Wipe away
All your tears
Together we will
Conquer fear
Advertisement:

Galactic Drifter Vifam or Round Vernian Vifam or Space Castaway Vifam (Ginga Hyōryū Vifam) is a Sunrise mecha anime that first aired in 1983, conceived by Yoshiyuki Tomino and directed by Takeyuki Kanda. It included mechanical designs by artists Kunio Okawara and Mamoru Nagano, as well as character designs by Toyoo Ashida. A remake, Galactic Drifter Vifam 13 was created 15 years later.

During the year A.D. 2058, hostile forces (collectively known as the "Astrogaters") attack the human colony at Clayad, the third planet of the Ypserlon system, which is located 43 light years away from Earth. Because of this, the colonists on Clayad are evacuated from the planet by the human military. During the confusion, some of the human children become stranded from their parents and escape in the training combat space ship, the Janous. With the help of the ship's defense systems, they manage to arrive at Belwick, the fourth planet of the system, where other humans supposedly live. However, upon arriving they discover that the colony at Belwick had already been destroyed by the enemies too. Learning to pilot the VIFAMs, the 13 children decide to escape to Earth by themselves.