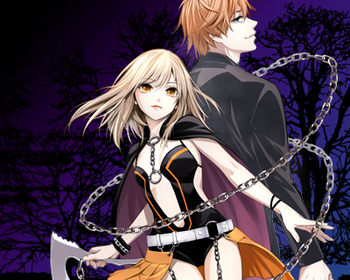 Chloe Love is an actress struggling to find work, after starring as the heroine of a failed, low-budget horror series. Her last chance to land a role takes a turn for the strange, when the producer is possessed and tries to attack her. Rescued by the mysterious Kai Iod, Chloe learns that her potential as a Spirit Medium has made her a target for supernatural forces that escaped from Hades. Awakening her ability to channel spirits, Chloe becomes an agent of the organization "Arkham Bullet": The Ghost Reaper Girl!

A series by the creator of Rosario + Vampire, Ghost Reaper Girl is a Reverse Harem/Magical Girl series borrowing heavily from the Cthulhu Mythos.