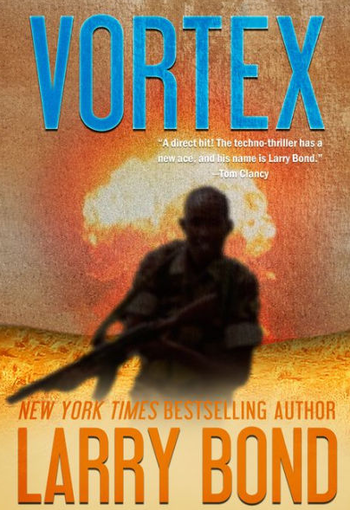 Vortex is a 1991 novel by Larry Bond and Patrick Larkin. An entry in the Possible War genre, the novel was set in The Apartheid Era in South Africa. In this Alternate History, a successful attack by the African National Congress kills the moderate leaders of South Africa, enabling a reactionary government led by Karl Vorster to take power. Vorster promptly pulls a political 180, returning the country to strict apartheid, suppressing the media, and leading South Africa into a war with its former colony, Namibia, and her Cuban and Angolan backers. As the forces of Apartheid and Communism battle one another for control of the world's strategic minerals, and South Africa slips further and further into chaos, an American intervention may be the only way to salvage anything from the ruins of what was once Africa's most prosperous country.
Advertisement:

The novel has a large cast. Some of the more important ones include:

The novel sold well and recieved good reviews. It was followed by Cauldron, Bond's third novel with Larkin.

Tropes Appearing In This Novel Include: