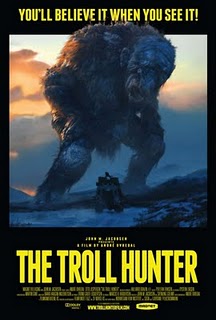 The Troll Hunter (Trolljegeren) is a Norwegian found footage satire film released in 2010. The movie purports to be found footage, sent in to the film studio, and opens and closes with comments from the film studio about the fate of the footage and the film makers. The film follows three film students from a journalism college — Thomas (presenter), Kalle (camera) and Johanna (sound) — who are planning to make a documentary about a possible bear poacher and local eccentric identified only as "Hans". Hans turns out to be in the employ of TST, the Norwegian troll-safety department, as their government-sanctioned troll hunter (of the Norwegian folklore kind of troll) who hunts and kills trolls who come into contact with people.

Although initially reluctant, Hans eventually agrees to take the trio with him on his latest round of troll hunts, citing tiredness with the current policies of the department and figuring it's about time the truth came out.

Not to be confused with Troll Hunters.