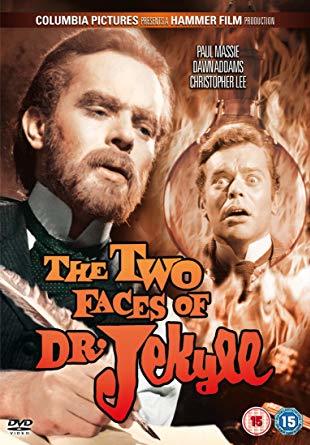 The Two Faces of Dr. Jekyll is a 1960 Hammer Horror film. Based on Robert Louis Stevenson's The Strange Case of Dr. Jekyll and Mr. Hyde, it takes many tropes common in adaptations of the work and turns them inside-out.

Dr. Henry Jekyll (Paul Massie) is a devoted man of science, which leads to him having zero social skills and less time to spend with his wife, Kitty (Dawn Adams). Deciding the loneliness is too much to bear, she cheats on him with their mutual friend, the gambler Paul Allen (Christopher Lee). Jekyll, unaware of this, ignores the warnings of his colleague Dr. Littauer (David Kossoff) and determines to find out firsthand what makes man evil by testing his newly-developed drug on himself.

The monster that emerges, Edward Hyde, is disarmingly handsome and completely amoral. After seducing the exotic snake charmer Maria (Norma Marla), he grows bored with conventional debauchery and sets his sights on Kitty—in effect planning to have an affair with his own wife. Hyde tends to Paul Allen's gambling debts as bribery, then attempts to blackmail them, but where those fail murder succeeds. Hyde successively murders Jekyll's friends and loved ones, and a distraught Kitty takes her own life out of grief. If that wasn't bad enough, Hyde decides to frame Jekyll for his crimes, knowing that the doctor will have to cede control to him lest he be a hunted fugitive. At the very last moment, Jekyll is able to regain control and submits to arrest by the police, stopping Hyde at the cost of his own freedom.