Film / The Autopsy of Jane Doe 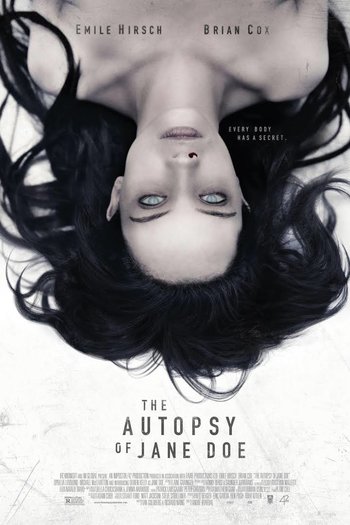 Every body has a secret.
Advertisement:

The Autopsy of Jane Doe is a 2016 American horror film directed by André Øvredal of The Troll Hunter fame and starring Emile Hirsch and Brian Cox.

One day, the police investigate a particularly gruesome and mysterious murder case but the most intriguing element is the corpse of an unknown woman discovered in the basement. The same night, the local coroners Tommy Tilden and his son Austin are tasked with performing an autopsy on that same woman, given the name "Jane Doe" for the time being, in their underground morgue in order to uncover the cause of death. As they perform the autopsy on Jane Doe, the corpse becomes more and more puzzling and supernatural events threatening their lives begin to occur in their morgue. Trapped, Tommy and Austin struggle to survive the night with Jane Doe.

Not to be confused with The Autobiography of Miss Jane Pittman, a very different film.

Due to the nature of the film, spoilers will be difficult to avoid. You Have Been Warned.

The Autopsy of Jane Doe contains examples of: