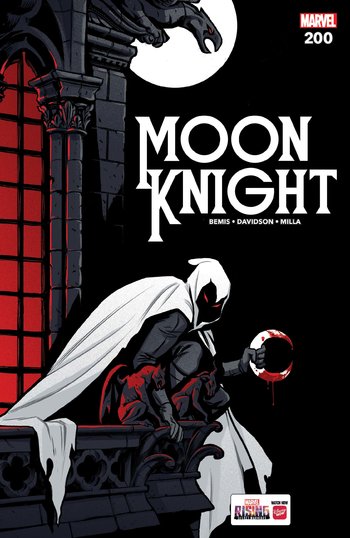 Oof, you might want to get that cleaned, pal.
"Mercenary Marc Spector died in Egypt, under the statue of the ancient deity Khonshu. He returned to life in the shadow of the moon god, and wore his aspect to fight crime for his own redemption. He went completely insane, and disappeared. This is what happened next."
— Moon Knight #1 (2014)

Marc Spector, AKA the Moon Knight, is a Marvel Comics superhero who debuted in Werewolf by Night vol. 1 #32 (August, 1975). He was created by Doug Moench and Don Perlin. Spector was once a U.S. Marine, but quit and became a mercenary when he went to Egypt. There, he befriended French pilot Jean-Paul DuChamp, often referred to simply as "Frenchie", while working for Raoul Bushman. The trio soon found an archaeological dig that unearthed a temple that contained a statue of the moon god Khonshu. Bushman decided to loot the site, and in so doing, killed the lead researcher, Dr. Alraune. In response, Spector picked a fight with Bushman that did not go as well as planned.

As Spector lay dying, Khonshu appeared to him in a vision and offered to bring him back to life if he became the god's avatar on Earth. He did. After repaying his new Arch-Enemy Bushman, he went back to America with Frenchie and the late Dr. Alraune's daughter Marlene. Deciding to become a crime-fighter, Spector created a silver cloaked costume and became the Moon Knight. Ashamed of his mercenary past, he invested the money he acquired from those jobs, developed a small fortune, and created the identity of Steven Grant, as well as the other identity of common taxicab driver Jake Lockley.

Later incarnations have had him lose his grip on reality and treat each of these personae as different people, among other identities crafted to suit his needs. He's commonly seen as a Captain Ersatz of Batman, due to the "millionaire playboy" Steven Grant personality and cape-wearing, overly-thematic nighttime vigilantism. Strictly speaking he has a lot more in common with The Shadow, also the chief inspiration for Batman, but writers have often used him for a sideways commentary on DC's greatest Cowl, usually as a contrast - people may ask if Batman is as crazy as the villains he fights, but Moon Knight definitely is.

He also entered the spotlight (kind of) as an official member of Captain America's Secret Avengers after Siege. In 2014, he got a new ongoing series with the first six issues by Warren Ellis and Declan Shalvey. After them, it became a rotating writer/artist book, with Brian Wood and Greg Smallwood doing #7-13 and Cullen Bunn and Ron Ackins doing #14-17. Declan Shalvey remained on covers for a while and Jordie Bellaire on colours. Each issue was a done-in-one adventure (with some recurring background plots) rather than the more common arc-based structure.

After Lemire's run finished, Max Bemis and Jacen Burrows took over creative team duties in time for the Marvel Legacy initiative, which returned Moon Knight to his all-white costume and traditional superheroics in contrast to Lemire's Mind Screw and Ellis's Genre Throwback to The Shadow (kinda).

A Moon Knight series is development for 2021-2022 at Disney+ for Phase 4 of the Marvel Cinematic Universe with Oscar Isaac set to play the character.