Western Animation / Jana of the Jungle 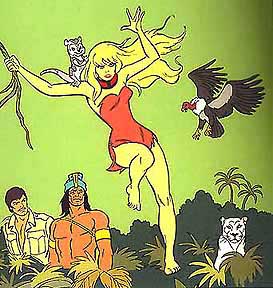 Jana of the Jungle was a 1978 Hanna-Barbera Animated Series created by Doug Wildey, of Jonny Quest fame, as part of The Godzilla Power Hour.

Jana, voiced by BJ Ward, roams the rainforests of South America in search of her lost father. She is aided by Montaro (Ted Cassidy), a native who is a descendant of a lost warrior tribe, and Dr. Ben Cooper (Michael Bell), a young wildlife biologist who maintains the preserve started by Jana's father. Jana also has two Non-Human Sidekicks: Ghost the albino jaguar and Tiko the coatimundi yapok. Jana's collar doubles as a sharp-edged throwable weapon which could—among other things—cut vines and bore holes through cave walls. Montaro wields the equally potent Staff of Power that can cause earthquake-like shockwaves when it strikes the ground.

Jana also made a cameo appearance on Yogi's Space Race.