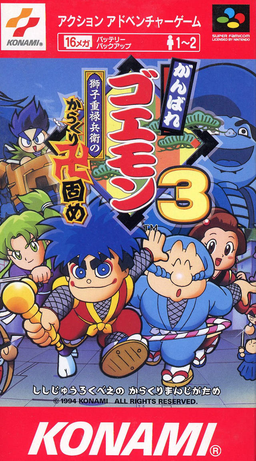 Ganbare Goemon 3: Shishi Jūrokubē no Karakuri Manji-gatame (Go for it! Goemon 3: The Mecha Leg Hold of Jurokube Shishi) is a 1994 action game developed by Konami for the Super Famicom. It is a few steps more ambitious than the previous game, as it is equal parts side-scrolling and top-down action and allows players to switch between Goemon, Ebisumaru, Sasuke and the now playable kunoichi Yae at will to use the specific abilities of each character to get past stages that focus on exploration and puzzles.
Advertisement:

The story begins when the Wise Man develops a time machine and tests it out for chasing after the women of the future. However, he's quickly kidnapped by Bismaru, a villainous nun who looks suspiciously like Ebisumaru. After meeting up with Sasuke and Yae, Goemon and Ebisumaru must prevent Bismaru and her tyrannical boss Jurokube from taking over the past.

It was followed by Ganbare Goemon: Kirakira Douchuu in 1995 and although the game never left Japan it finally received a fan translation in 2020.

Go for it, tropers: