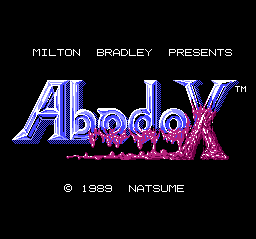 Abadox: The Deadly Inner War is a Shoot 'em Up developed (in part) by Natsume for the Nintendo Entertainment System in 1989 and published in the US by Milton Bradley of all companies in 1990.
Advertisement:

The game's plot involves the planet Abadox (Earth in the Japanese version) being attacked in the year 5012 by Parasitis, a techno-organic horror (actually a whole race of them in Japan) that manages to obliterate nearly the entire defense fleet of Abadox, save for a single ship, piloted by Second Lieutenant Nazal (Nazar in Japan). Nazal goes into Parasitis—not just to continue the attack, but to save Princess Maria (who in Japan is not a princess, but his lover), who was swallowed whole by it.

The game is notable for being really gruesome for NES standards, and it's often compared to Life Force due to its organic theme and story. Abadox was also notorious for its horrendous difficulty, even for a game of this genre.