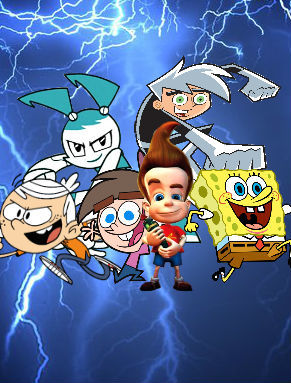 "Once, there was a group of heroes. Heroes that lived separately from each other, from not just homes, but universes. This team consisted of: A talking sponge who knows martial arts. A boy with magic fairies. A boy genius. A boy with ghost powers. A female cyborg with many weapons, and a little boy who had nothing, but the love of his ten sisters."
Advertisement:

A Nickelodeon crossover fanfic series by a user named CrapperGeek

The Evil Syndicate has returned, with one more attempt to rule the world. The Nicktoons crew must form again to foil their new plan. Oh, and Lincoln Loud joins them, while his ten sisters go on a journey to retrieve him, with Jenny by their side.

Nickelodeon Heroes serves as both an alternate timeline and a continuation of Nicktoons Unite!. You can read the finished story here

In Nick Heroes 2: Rise of the Cluster

, the Nicktoons (now joined by new allies Zim and El Tigre) face Queen Vexus and her army of Clusters.

, the Nicktoons once again have to team up to face their greatest threat ever: a Villain Team-Up between Vicky, Snaptrap and Sartana of the Dead. Also has a sequel in 3 5

, which has gone through several revisions and Development Hell.

is the fourth installment. In it, a mysterious force is wiping out all the male characters, forcing Sandy, Sam, Cindy and Tootie (among others) to team up in order to save their friends.

is a very rough re-imagining of Globs of Doom, revolving around SpongeBob, Timmy, Lincoln, Jenny, the TMNT and their allies teaming up to defeat a mysterious slime-filled enemy.

A couple short stories were written: one revolving around April Fools Day

, and another revolving around the team becoming superheroes in a comic book

also features several oneshots.Almost all of them are deleted.

Part I contains example of: