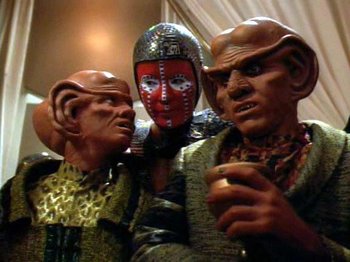 Let's play guess the females! note Hint: It's not Quark.
It's after hours at Quark's. And the crooked Ferengi and associates (including Dax) are engaged in a friendly game of Tongo. One of these players, a new waiter by the name of Pel, brings Quark aside with a new money making idea. Sand peas. A saliva drying snack food. Replace his usual complimentary nuts with these, and he'll sell twice as many drinks.
Advertisement:

Quark is impressed. Soon afterwards, Grand Nagus Zek contacts Quark. He's heading for DS9. With the deal of a lifetime. He's made contact with a Gamma Quadrant species called the Dosi. And he'd like to hold the conference on the station.

After a negotiation with Sisko, they approve. And he reveals the amazing profit idea: Tula Berries! Specifically, Tulaberry wine! He insists this seemingly simple product is the key to business in the Gamma Quadrant. And he wants Quark to headline the negotiation.

Quark accepts, but is warned by Pel of the 48th Rule of Acquisition: "The bigger the smile, the sharper the knife". He thinks Zek is setting Quark up to be the Fall Guy if this deal goes south. Impressed again by his business savvy, and over Rom's objections, Quark makes Pel his assistant for the negotiation.

Well, the Dosi turn out to be rather rude and aggressive people. Basically Klingons with painted faces and without the forehead ridges. Negotiating for 10,000 vats of Tulaberries, the Dosi refuse to hear Quark out, demanding to know why Zek isn't handling this exchange himself.

Returning to Zek with the news, Quark's interrupted by a new request: Zek wants 100,000 vats instead. The Dosi do not take this well, and leave the station for their home-world. Zek is about to tear Quark a new lobe-hole when Pel intervenes, declaring that he and Quark will take the Nagus' ship to the Dosi home planet and negotiate again.

Before leaving, Dax has a sit-down with Pel on the promenade. She's never met a Ferengi like Pel— and has also noticed Pel's obvious crush on Quark— and she's intrigued. Well, there's a reason Pel seems so unique: because she's the first Ferengi female Dax has ever met. She's disguised her gender with a pair of fake lobes and a vest, and she's breaking a lot of laws with this ruse.

On the Dosi home planet, Quark and Pel find out they can't sell them 100,000 vats of wine. But a Dosi named Zyree knows someone that may. The Karemma. A mysterious race working for something called "The Dominion".

Returning to the station, Zek reveals this was the plan all along. He'd heard whisperings of this mysterious Dominion, and he's ecstatic that Quark has managed to start business with them. Quark is about to become a very rich Ferengi.

Well, things go south quickly. While they were away, Rom discovered Pel's fake lobes. He quickly reveals the secret to Quark, who passes out on the spot.

Rom wants to report this to Zek at once, but Quark knows better. A Ferengi female conducting business is a crime. And Rom and Quark would be guilty as well. He manages to talk Rom into keeping this between the three of them.

Well, Pel has different ideas. Marching into the room, she reveals her true gender to Zek. The Nagus is outraged. A clothed female conducting business is a heinous crime, but Pel has him over a barrel.

The leader of the Ferengi Alliance would look pretty dumb if the news of a female doing business for him got out. The Nagus knows when he's beaten, but Quark isn't escaping this unscathed. He will lose all his Gamma Quadrant profits, and the secret of Pel will remain a secret.

Though he considers it, Quark stays on Deep Space Nine instead of following after Pel to the Gamma Quadrant.