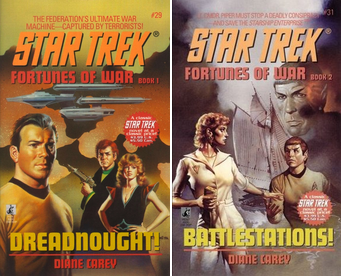 Fortunes of War is a two-part story by Diane Carey in the Pocket Books line of Star Trek novels. It consists of the novels Dreadnought! and Battlestations!, which were originally released as individual books in 1986 but were reprinted under the Fortunes of War header in 1999. Both novels revolve around Lieutenant Piper and the Starfleet officers she befriends as part of the crew of Enterprise, and are unique in that they are the only Trek novels to be written in First-Person Perspective.

Dreadnought! centers on Piper being associated with the theft of a prototype dreadnought-class warship, which eventually turns into an effort to stop a power-mad admiral from staging a coup within the Federation itself. Battlestations! picks up a few months later, and revolves around the theft of prototype transwarp technology and the power scramble that results from multiple spacefaring peoples desiring the tech for themselves, with Piper again being pulled into events due to one of the key people behind the tech being an old associate.