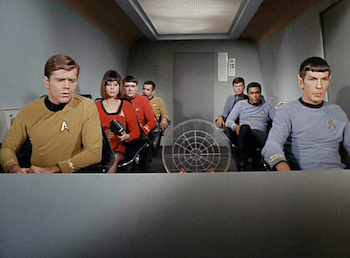 Don't be fooled, the ones wearing red shirts aren't going to die.
Advertisement:

The Enterprise is en route to Makus III with medical supplies when they come across Murasaki 312, a quasar-like formation. Much to the objection of Galactic High Commissioner Ferris, Kirk sends a party to investigate.

The electrical interference started getting rough. The shuttle, it was tossed. If not for the courage of the fearless crew, Galileo would be lost. (Galileo would be lost.) The ship set ground on the shore of this lone planet Taurus II. With Mr. Spock! The Doctor too! The Engineer! And Boma! The Yeoman! And the rest! Are here on Taurus II!

Now, how are they gonna get off?