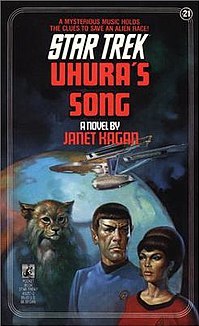 Uhura's Song is a novel of the Star Trek Expanded Universe written by Janet Kagan.

The planet Eeiauo is threatened by ADF, an epidemic which crosses over to humans and starts spreading through the Federation. Captain Kirk and the Enterprise (along with a stand-in medical officer, Dr Evan Wilson, as McCoy is helping deal with the situation on Eeiauo) set out to find a planet that may hold a cure. Their only clue to the planet's location is a folk song Uhura learned from an Eeiauoan friend years ago.