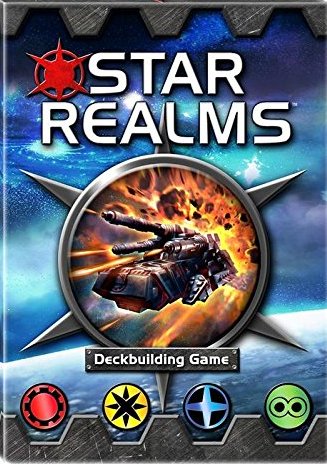 So far no new star realms have emerged successfully since the Machine Cult, but that doesn’t stop people from trying. Even various factions from within Blob space have been known to throw their lot in with humans seeking a new start...
This is your opportunity to try and form a coalition of space farers trying to establish your own new star realm.
Advertisement:

Star Realms is a tabletop Deckbuilding Game with a space war theme. It was designed by Rob Dougherty and Darwin Kastle, and published by White Wizard Games in 2014.

Gameplay is straightforward: Each player's turn, the player has five cards, plays them, follow the effects (either adding money, life, or defense points or special effects), buy and attack. Afterwards, the player discards everything (except certain cards), redraws, and starts all over again next turn.

As the game progresses, the players could buy ships and bases from four factions:

As the players are actually unaffiliated, they are able to use any faction without any problems. While unnecessary to stick one particular faction, there are advantages in the game if a player does this.

Easy to play and very popular, the core game comes in a single purchase. In addition to the physical card game, a digital version is also available for the PC, Mac, iPad, and Android. Star Realms Rescue Run is a novel based on the game.

Cthulhu Realms re-implements the system used in Star Realms, based on the works of Lovecraft. Hero Realms is another spin off with a high fantasy theme and setting. Star Realms Frontiers was released after a successful Kickstarter campaign, creating nine new sets for the series.