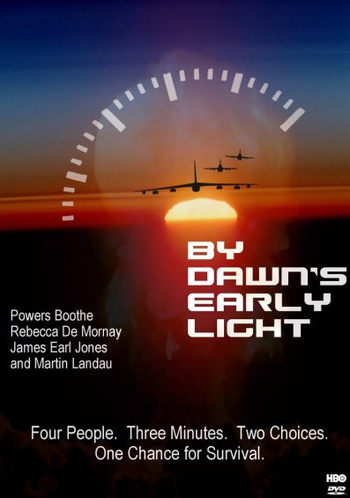 A group of rogue agents in the Soviet military steal a nuclear missile and launch it at Ukraine from Turkey, tricking the USSR into a full-on counterattack against the West. Before the missiles land the mistake is discovered, but the American President's generals urge him to launch a counterattack. Bombers are launched and missile subs are put to sea. One of the nuclear alert bombers, a B-52G Stratofortress callsign Polar Bear One, takes off from Fairchild Air Force Base in Washington state moments before it's vaporized by an incoming Soviet missile. In the confusion, the president goes missing, triggering a succession crisis and threatening to escalate the conflict to apocalyptic levels.
Advertisement:

The film was produced for HBO in 1990 and features several notable actors including James Earl Jones, Martin Landau, Rebecca De Mornay, and Rip Torn. It's also notable for being the last American World War III movie released before the dissolution of the Soviet Union the following year.