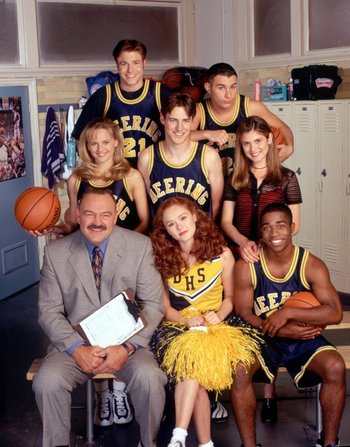 Saved by the Bell WITH BASKETBALL!

More specifically, Hang Time was an American teen sitcom that ran from 1995 to 2000 on NBC's Saturday morning Saved by the Bell-clone block, TNBC (its executive producer, Peter Engel, was responsible for 90% of the shows in the block, though he didn't get involved in Hang Time until its second season). Created by Troy Searer, Robert Tarlow (who went on to create the two-seasoner TNBC stablemate One World) and Mark Fink (a former writer for SBTB), the series centered the adventures of the Tornadoes, a basketball team of the fictional Deering High School, in the fictional Indianapolis suburb of Derring, Indiana. At the start of the series, Julie Connor moves from the big city to Deering and joins the varsity boy's basketball team, where she must adjust to culture shock as well as trying to fit in on with a team of all males.

The squad is led by tough-with-a-purpose coaches: for the first three seasons, Coach Bill Fuller (played by NBA great Reggie Theus) helmed the squad; after Theus left the show at the end of season three (in a Retcon, as his character announced that he turned down a college coaching offer in the third season finale), the Derring Tornados' coach became Mike Katowinski (ironically played by legendary NFL player Dick Butkus) – both of whom experience some grief from their players' antics, but who genuinely care for them and help them when they need the guidance.

Much like spinoff Saved by the Bell: The New Class (which aired at the same time), the show was infamous for its constant cast changes. Only two characters from the first season remained on Hang Time by the sixth and final season – Tomboy star player Julie Connor (Daniella Deutscher) and Rich Girl head cheerleader-turned-team manager Mary Beth Pepperton (Megan Parlen), with season three introductions, ace player Michael Manning (Adam Frost) and redhead cheerleader Kristy Ford (Amber Baretto) being the longest-running of the characters added in later seasons to stay on to the final episode – those shuffling in between have been lost to time, and (with the exception of Nick Hammer (played by Mark Famiglietti in season four), who was given a proper send-off in the season five premiere "Hello and Goodbye") have been written out with just a brief explanation in each season's first episode.