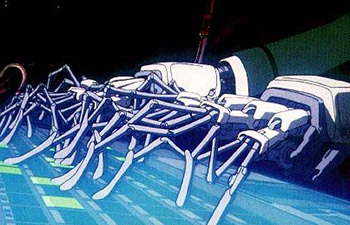 When developers won't bother to do it right as long as the end user can live with it.
"You would think that the marriage of biology and machinery would make it possible to do those things without lifting a finger. But instead, we see a drone amble over to a pylon, and do precisely that — lift a finger. It presses a single button, then wanders off to push another button. So much for Borg efficiency."
— Jim Wright

You see this all the time; robots (usually the Robot Buddy) or cyborgs using controls just like people do. That is; hitting buttons.

This leaves out the more interesting and probably easier path of forming some kind of short-range connection via cable or radio and just thinking at the computer in question. After all, Everything Is Online, right?

Possibly the writer is trying to hold back on clues that the character is a robot or perhaps the character is meant to be hiding the fact from other characters. After all how many people do you see with cables or wires sticking out of their ear? Maybe it's an aversion of Plug 'n' Play Technology, if the robots are using a system designed for humans.

In visual media, it's most likely a case of Rule of Perception and the desire to have something actually happen on-screen. As thrilling as it might be to watch a robot send a wireless signal to a nearby computer, it wouldn't be very clear what it was accomplishing by doing so.

Naturally, a robot using a keyboard is almost guaranteed to be superhumanly proficient at Rapid-Fire Typing.