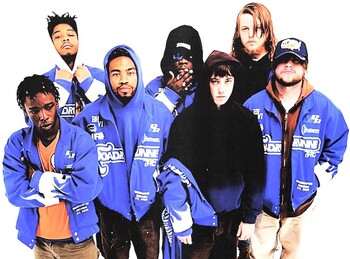 Its origins date back to 2010 through the group AliveSinceForever, organized by band leader Kevin Abstract from a mix of high school friendsnote Ameer Vann, Matt Champion, JOBA, and Merlyn Wood and members recruited online through the Kanye West fan website KanyeToThe

(back when it was called KanyeLive), leading to them gaining the title of "the Internet's first boy band." The group only released one EP before disbanding in 2014 and eventually rebranding as the boy band we know today, named after Kevin's childhood street in Corpus Christi, Texas.

The group released their debut mixtape ALL-AMERICAN TRASH in 2016 to moderate buzz, but they weren't recognized on a widespread level until the SATURATION trilogy, a series of three highly successful albums released from June to December 2017 that were all acclaimed for showcasing chemistry between the group’s distinct members, as well as a diverse array of sounds mixing hip-hop, pop, R&B and shades of alternative rock. The stellar ratings all of the albums got from outlets like The Needle Drop also didn't hurt.

Throughout 2018, multiple albums — TEAM EFFORT, PUPPY, and THE BEST YEARS OF OUR LIVES — were announced and then shelved. PUPPY was the most poised to release but was obstructed by numerous sexual misconduct allegations made towards member Ameer Vann that were serious enough to, as of May 27 of that year, remove him from the group.

Eventually, the band settled on an album called iridescence — created largely during several weeks the band spent in London — which became the only one of the announced albums to see an official release, on September 21. The album was confirmed as the first installment in a second trilogy titled after TBYOOL.

The band announced their fifth album GINGER in midsummer 2019, eventually releasing it at the end of August, with one of its singles ("SUGAR") going on to become their first Billboard hit and platinum record. After a period of non-studio singles and snippets following the onset of the COVID-19 Pandemic, they would begin hinting at a sixth album, and started formally promoting it in 2021. While its name was initially teased as RR, it was revealed to be ROADRUNNERnote full title: ROADRUNNER: NEW LIGHT, NEW MACHINE, and following two single releases, the whole album was released on April 9, 2021. Kevin later confirmed that ROADRUNNER is the second installment of the TBYOOL trilogy.

News about the band's future from there was sparse. The prospect of a seventh album was officially promoted

, and among the claims circulated by band members (mainly Kevin) were the possibilities of the album incorporating past unreleased works like PUPPY and TEAM EFFORT, and being both the final TBYOOL installment and the final BROCKHAMPTON album.note Granted, the lattermost statement was made about the third SATURATION album, but TEAM EFFORT was promoted before it even came out. However, in January 2022, BROCKHAMPTON suddenly announced

that they will be taking an indefinite hiatus as a group following their performance at Coachella in April of that year. While the language used in their initial statement implied that the band would merely be taking a break, other statements (including Kevin repeatedly calling the Coachella performance their last show ever) indicated that the band will be done for good. At the end of the performance, they announced that they do have a final album, slated to release in 2022.

BROCKHAMPTON has also dabbled in visual media. In 2016, they produced and starred in the single-season Viceland docuseries American Boybandnote which covers the group’s origin, creative process, and mission, and also follows their first tour across the US in support of Kevin’s solo album American Boyfriend, as well as the production and release of SATURATION, the completion of the SATURATION trilogy was commemorated with a documentary following its creation in 2017, and in 2018 another documentary titled The Longest Summer in America had a limited theatrical run to coincide with the release of iridescence.

Readin' tropes on a Friday: