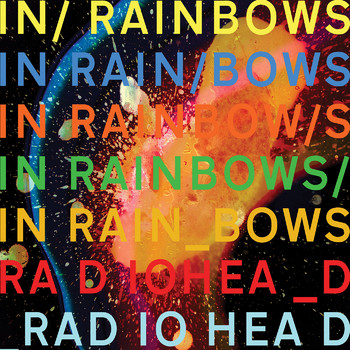 "Don't get any big ideas. They're not gonna happen." 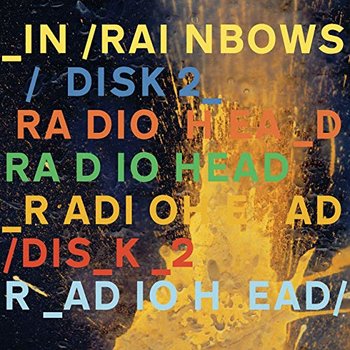 "This is your warning, four minute warning."
"You used to be alright — what happened?"
— "15 Step"
Advertisement:

In Rainbows is the seventh studio album by English Alternative Rock band Radiohead, released in 2007 after 2 years of production and serving as their comeback album after a 4-year hiatus following their last album, Hail to the Thief, in which band members took a break and pursued individual efforts (Thom creating his first solo album The Eraser, Jonny scoring Bodysong and There Will Be Blood).

The album is also their first on XL Recordings, onto which Yorke was already signed as a solo artist, having left their old UK and US labels Parlophone Records and Capitol Records (respectively) due to them having already fulfilled their six-album contract with EMI, as well as due to the band's growing dissatisfaction with major label culture. The band and their individual members would continue to release both Radiohead and solo material through XL in the years since.

It debuted at #1 in both the US and the UK, and in one year sold 3 million copies in both physical and digital formats. The album was also notable for its innovative "pay what you want" system that got lots of media coverage and was promptly discontinued for future albums. The decision to utilize the system for this album in particular was influenced by a Content Leak of an unfinished draft of Hail to the Thief that drew the band's ire (not because Digital Piracy Is Evil, but because it meant people were hearing an unfinished product). The influence was so strong that the band referred to the album's date of release as their "leak date."

Following the band's dissatisfaction with the influx of tracks on Hail to the Thief, they vowed to avoid the same mistake with In Rainbows, settling on a 10-song tracklist, saving any additional material for limited-edition releases. This led to the special edition of the album including a second disc of 8 extra songs, known simply as In Rainbows Disk 2. The songs were uploaded to the band's website in 2009, and subsequently to streaming services as an EP in 2016.

In Rainbows was supported by three singles: "Jigsaw Falling into Place", "Nude", and "Reckoner"; "House of Cards" was also released as a promotional single. In addition to these singles and their music videos, every other song received their own music videos via a contest in 2008 where fans submitted storyboards for video ideas, with the winners being given $10,000 to make their visions a reality. The band also promoted the album with the Thumbs Down and Scotch Mist webcasts, performing a variety of songs off of In Rainbows, covering other artists, and showcasing poetry and music videos.

You are not to blame for bittersweet tropers: