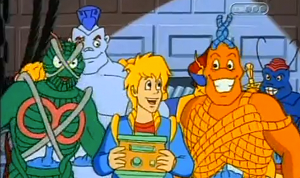 Chris and the Goop-Mandos (season 1)
Advertisement:

Creepy Crawlers was an animated series by Saban Entertainment that ran from 1994 to 1995. It was loosely based on a toy line that revolved around molding plastic into insects. The show was about a boy named Chris Carter. He spends his days working in a magic shop run by Professor Googenrime, an old magician who wishes to gain true magic powers to get back at the magicians that laughed at him. Chris experiments with a Magic Maker to help with business, but Googengrime's ritual empowers it and it accidentally creates insectoid heroes called the Goop-Mandos (Hocus Locust, Tick-Trick-Tick, and Volt Jolt). Googengrime, however, takes the Magic Maker and uses it to create horrible creatures called Crime Grimes. Chris teams up with the Goop-Mandos to foil Googengrime's schemes in every episode. During the course of the show, a few other Goop-Mandos joined: Sting Ring, Commantis, T-4, and Fire Eyes.