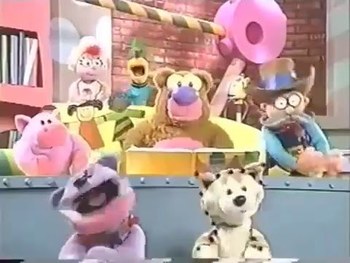 The show's cast.
While walking through a toy store the day before today,
I overheard a crayon box with many things to say.
Bubby in the intro
Advertisement:

The Crayon Box is a puppet and animated series based on a poem by Shane DeRolf, it was produced by The Chiodo Brothers, better known for making Killer Klowns from Outer Space and Sunbow Entertainment.

The show followed a bunch of Living Toys living in a toy store. At the beginning of each episode, the crayons in the titular box would introduce the story of the episode, and the moral at the end.

The show ran on YTV in Canada from 1997 to 1998, and in syndication alongside Bananas in Pyjamas in the United States.

The Crayon Box contains examples of: