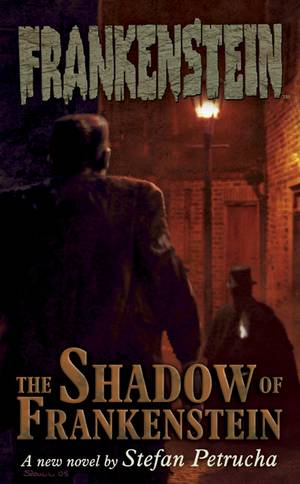 Frankenstein: The Shadow of Frankenstein is a 2006 novel by Stefan Petrucha. Part of a series of novels from DH Press tying in with classic Universal Horror films, this novel is an interquel taking place between Bride of Frankenstein and Son of Frankenstein.
Advertisement:

Believing the monster dead, and wanting to escape infamy in their home country, Baron Henry Frankenstein and his wife, Elizabeth, move to London. However, the monster is alive and well and follows them as a stowaway, and if that wasn't bad enough London finds itself home to a spate of gruesome murders apparently committed by a copycat killer imitating Jack the Ripper. As the killings are performed with surgical precision, Henry Frankenstein ends up as one of the suspects.