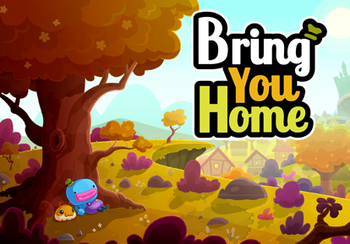 Rewind.
''Bring You Home" is a mobile phone game released for Itunes in January 31, 2018, going at 2.99$. Created by Alike Studios, is an adventure puzzle game acting as a Spiritual Successor to Love You to Bits. The game revolves around Polo, a bumbling, but ultimately kind, alien. During the night, Polo has his pet stolen by a duo of hooded figures who escape through a mysterious green portal. Polo follows them through the portal to get his pet back, causing a massive chase sequence that will span across the whole universe...
Advertisement:

Unfortunately Polo isn't that bright, he'd often get into situations where he'll suffer through various amounts of Amusing Injuries to flat out death. Luckily for him, the game's central mechanic involves you manipulating the level by sliding out specific parts of the level with another scene, which can either help him or fail miserably.

Bring You Home contains examples of: