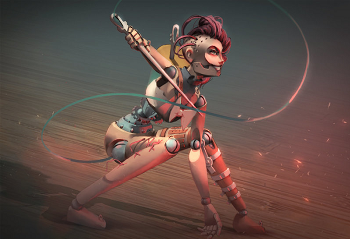 This little dolly went to murder.
Broken Puppet was created as the final project of a student team of seven for their Master's Degree in Videogames Development at Pompeu Fabra University. It is a Dark Fantasy Puzzle Platformer which unique gameplay mechanic is the use of thread to manipulate the environment and kill the occasional opponent. It was completed for PC in 2015 and made available for free download here

Katherine, the protagonist, is the star of the puppet theater, drawing in crowds of adoring fans. But time catches up with her and when she's worn, she's cast into the basement and replaced by a new singer. But unlike the other puppets who get dumped, Katherine's ego is strong. She breaks the strings that once controlled her and refashions them into a makeshift weapon. Her goal is simple: regain her place in the spotlights.