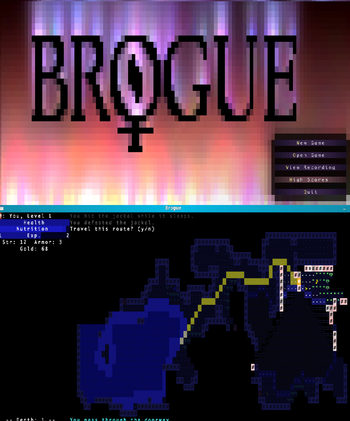 Brogue is a Roguelike game by Brian Walker, initially released in 2009. Famously, it was written by Brian after a theft caused him to lose his copy of Rogue, which he had been hacking around with. As a result, Brogue is fairly close to being a genuinely new fork of the Roguelike genre, not a Hack or Moria derivative.
Advertisement:

Unlike many Roguelikes, which tend to have distinct Guide Dang It! elements in their gameplay, Brogue tries to be as friendly as possible, giving you hints about items, and (for example) telling you roughly how many hits a given monster will take to kill you when you see it.

Brogue is available for Windows, Mac and Linux, and has been ported to the iPad (available on the App Store).