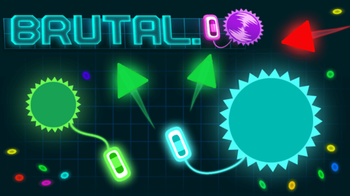 Brutal.io is a video game created by the same guy who made Wings.io in 2017. It's an .io game similar to Zlap.io, also featuring players fighting each other using spiky balls. However, unlike Zlap.io, the balls can be thrown leaving the player who threw them defenceless but can help with reaching faraway targets.