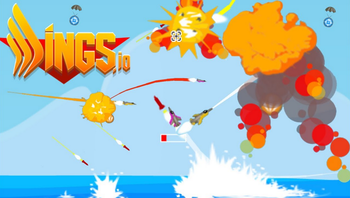 You play as a fighter plane, whose main objective is to shoot down as many opponents as possible to get the highest score, and survive long enough to maintain it. You can use up to four weapons (plus one secret one), and collect power-ups from air drops. Be warned, this can get quite hectic when there are many planes duking it out. The game is also currently in beta.