"Curse these humanized ponies. They drive me to write." 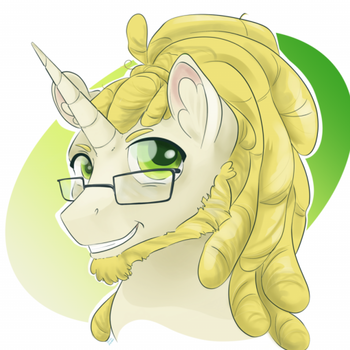 is a Fanfiction writer for My Little Pony: Friendship Is Magic. He's prolific in the fandom for numerous fanfics starring Sunset Shimmer; a particular claim to fame is that he wrote Sunset of Time, the first Sunset Shimmer fanfic on Fimfiction.net.note While technically there were a small handful of fics featuring Sunset that were published before Sunset of Time, it was the first fanfic to star Sunset as the main character. Another particularly famous work is Long Road to Friendship and its sequel Spectacular Seven. Beyond focusing on Sunset, though, his works vary greatly in tone, genre, and length.

Fanfics with their own pages:

The Albinocorn's works include examples of: