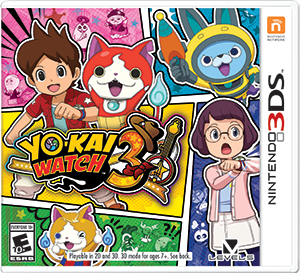 Yo-Kai Watch 3 is a main series game in the Yo Kai Watch franchise developed by Level-5 and released for Nintendo 3DS.

The battle system was overhauled in this game. Now each side can move around on a 3x3 grid, and aligning Yo-Kai together can allow them to chain attacks or protect ones behind them. Also introduced was “Dream Link”. With it, the player can fire a Yo-Kai Blaster to better befriend or directly damage enemies. It also has other gear.

Three versions of the game were released in Japan: Sushi and Tempura released in July 2016 and Sukiyaki in December 2016. Outside of Japan, only one version was released. It follows Sukiyaki’s base story but has all three versions’ exclusive Yo-Kai and features. This version came out in December 2018 in the EU/Australia regions and February 2019 in the US.