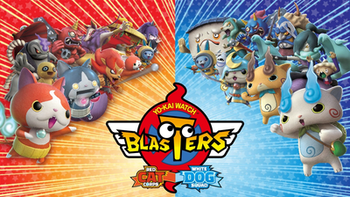 Yo-kai Watch Blasters (Yo-kai Watch Busters in Japan) is a spinoff of the Yo-Kai Watch series. Playable on the Nintendo 3DS, the original two games came out in Japan in 2015 but were released internationally in 2018.

The game is an expansion on the "Oni Blasters" mode from Yo-kai Watch 2. In contrast with the JRPG main series, in Yo-kai Watch Busters four players face up against other Yo-kai in a beat 'em up style. The game also supports online multiplayer.

There are two versions of the game: Red Cat Corps and White Dog Squad. Like with the main series, several different yo-kai are only available in each game (though they can be traded with). The free expansion Yo-kai Watch Blasters: Moon Rabbit Crew is also available digitally.