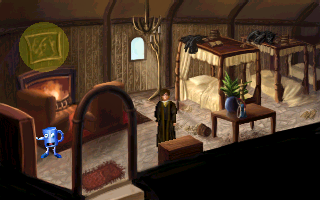 An indie Adventure Game created by Crystal Shard, and Affectionate Parody of the Harry Potter series. Larry Lotter, a student of the Warthogs magic school, realizes too late that he spent too much time partying and too little time on his studies. On the day of the final exams, he ends up missing two by oversleeping, then gets expelled from the third for blowing up his potion equipment. Thankfully, he is given a second chance in the form of a "Groundhog Day" Loop, that allows him to do the day over and over until he gets it right. And by "getting it right" we mean "cheating like there's no tomorrow".

Unusual among adventure games is that all other characters don't stand in one spot waiting for you to talk to them, but walk around on their own schedule. Several puzzles require waiting until a certain character is around, or is not around. For instance, if Drape is in the room, he will counter any spell you cast, which is rather inconvenient. While the items and characters go back as you roll back time, whatever spells you've learned stay learned.

The game has voice acting, and is translated into German, French and several other languages. Download link here

Includes tropes such as,