Web Animation / Guest From The Future 2 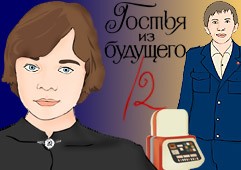 Гостья из будущего-2 (Guest from the Future 2) is a 2007 Web Animation Fan Sequel to Soviet Sci-Fi classic Guest from the Future done in Adobe Flash by 13dead. This Fan Film is set about five or six years after the original film. One day, Kolya is leaving his apartment to buy milk. In the stairwell, he runs into his friends, who are smoking and playing guitars. Just as Fima offers him a cigarette, the elevator door opens and reveals a White Void. Out steps Alisa, now a teenager wearing Cool Shades and a Spy Catsuit. She tells Kolya that the future has been betrayed. After the death of Werther the robot, the Time Institute brought in a new robot. This robot traveled to the beginning of the 21st century and became known as Harry Potter. Harry Potter created a transmitter that transmitted trashy TV programs to people, stupefying all of humanity. Their minds taken over, people forgot about science and space, and sat in front of the television, eating junk food. The inventions of the future did not happen, and Alisa needs Kolya's help to defeat Harry Potter and restore the true future.
Advertisement:

Once more, Alisa and Kolya step into the time machine, which has enough energy left for two people to travel to the future. They land in a Moscow that has decayed into decadence. Nobody is on the streets, as all the people are fixed to the television. So Alisa and Kolya go to the transmitter, which is a huge tower, encountering Harry Potter and his sidekick, the monkey Rin Ron. Harry Potter turns his broomstick into a scythe and tries to attack the heroes, but they get the jump on him. Alisa disarms him, and Kolya smashes him in the head with a bottle, then impales him with the scythe, saying "He who comes to us with a scythe shall die by the scythe!" Harry Potter vanishes, and the tower collapses, squashing Rin Ron. The television programs stop, and the newly freed people look out the window at the sky. As the sun rises over Moscow, Alisa and Kolya kiss. The end—

Wait. That's not enough. The narrator decides they should have another ending, where the heroes use another time machine to make the world better. So Alisa and Kolya find a shed with an old Volga sedan, and start it up. They drive the car back through time to their home era, undoing the damage of capitalism and Westernization, and making Russia intelligent and moral again. The future has been saved.

This Fan Sequel is extremely weird, and may be seen here