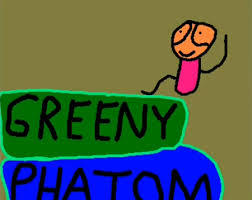 The logo to a show about logos.
Advertisement:

Greeny Phatom is a... bizarre MS Paint web cartoon, created by "animator" Robert Stainton in 2008. The show incorporates Surreal Humor, Limited Animation, and limited voice acting, and it boasts many episodes over its long run.

The show centers around the hard-to-decipher adventures of Little Guy, Dr. Beanson, and company. Little Guy and friends often find themselves face-to-face with petty tribulations, such as not being able to buy a toy they want or a dinner party gone bad. Also, Santed Sailor, a regular character who operates the Beach Park, serves as the main antagonist of the show.

There are also variety of spin-offs and copycats, such as Gree City, Geo's World, World of Jake, and many others, some of which even got their characters to appear in the actual Greeny Phatom. The show has also been parodied several times, SMB Madman (The Greeny Phatom Show) and finally (of all people) SiIvaGunner. This show even inspired the characters of felipebross, a former Scratch celebrity.

The earlier episodes can be found here

, while the later episodes can be found here

This pages needs an entry pimp, ESPECIALLY since none of the official sources are accurate. Rule of Cautious Editing Judgment is in full effect thanks to the show's... erm... reputation.

I'm Dr. Beanson, the one of a kind soldier, who brings you these tropes: