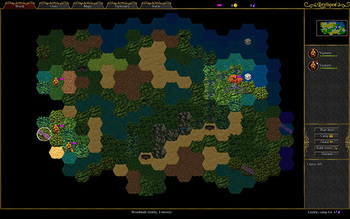 Leylines is a 4X Strategy game created by Crystal Shard. You play a powerful wizard, start by ruling a small nation, and plot to take over the world using armies from seven different races, and powerful spells in four different spheres. A notable effect is that the spells can be quite destructive to the world itself, particularly Chaos magic.

Contains tropes such as: