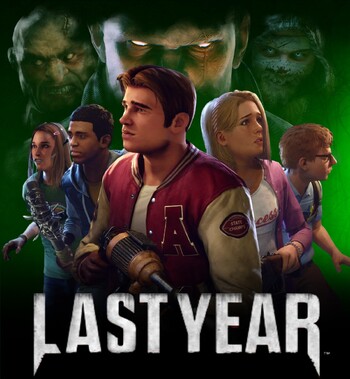 Face your fears!
"My, oh, my, East Side High till the day we die! We never... wanna... leave!"
— East Side's school cheer
Last Year: The Nightmare / Last Year was an Asymmetric Multiplayer survival horror game made by Elastic Games.
Advertisement:

After playing a cursed card game, a group of classmates wake up in a nightmarish reflection of their hometown known as The Nightmare. As they make their way through their school, they find themselves being pursued by a horrifying supernatural force, able to set deadly traps all over the school and manifest itself in the form of different Fiends out for their blood.

Though the player playing as the Fiend is outnumbered five to one, their biggest advantage comes in the form of Predator Mode, which allows them to move through the school unseen, keep tabs on the students' locations, set traps to split up and disorient the group, and choose a Fiend to spawn as to move in for the kill. With the Fiend able to spawn in anywhere from smashing in through a nearby wall to crashing in from the ceiling through a skylight, nowhere in East Side High is safe. However, the Classmates aren't completely defenseless - they're able to arm themselves with a wide array of improvised weapons, from lead pipes to jury-rigged flamethrowers and thermos grenades. If the Classmates want any hope of escaping the Nightmare alive, they'll have to complete objectives, use the unique talents offered by their roles to their advantage, and stick together.

You can visit the website for Last Year here

Last Year: The Nightmare was also available on Steam, when it was originally a Discord exclusive.