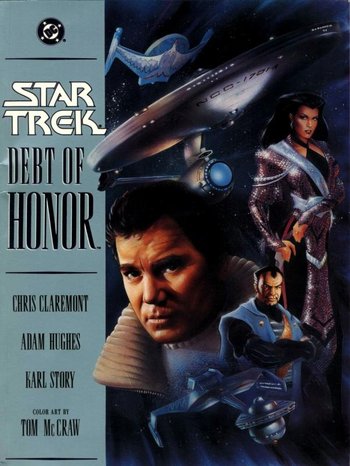 "If a starship is an embodiment of her crew and captain, then they likewise are a reflection of the ship. Encompassing both honor and shame. Enterprise was commissioned as a vessel of Starfleet. In Starfleet's service is where she has to earn her place. And my responsibility, my... penance, is to help her do it."
— Captain James T. Kirk
Advertisement:

The narrative of the novel is told in a series of flashbacks from a Framing Device a few months after Star Trek IV: The Voyage Home. As the crew of USS Enterprise (NCC-1701-A) join hands with the Romulans and Klingons for a covert mission to eliminate a threat to all their societies, James T. Kirk recalls his prior encounters with his Romulan counterpart, Commander T'Cel.

The markup is: Part of Volume 2 of the Star Trek (DC Comics) series.

This graphic novel provides examples of the following tropes: