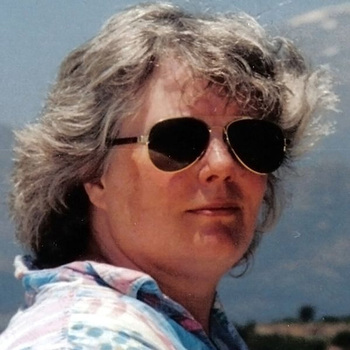 Vonda N. McIntyre (1948-2019) was an American science fiction writer best known for her award-winning novel Dreamsnake and her various novels set in the Star Trek and Star Wars universes.

Like most genre writers in the seventies, McIntyre started with short fiction. She won her first Nebula Award in 1973, two years before publishing her first novel, The Exile Waiting. She later adapted that award-winning short, "Of Mist, and Grass, and Sand", into a novel called Dreamsnake. Initially rejected by her publisher, the novel went on to win both another Nebula and a Hugo, making her only the third woman to have won the Hugo.

But maybe you're here to hear about the media franchise tie-ins. Yes, she wrote a novel based on Star Trek: The Original Series, called The Entropy Effect, and it was popular enough that she was hired to do the novelizations of several of the Star Trek movies: Star Trek II: The Wrath of Khan, Star Trek III: The Search for Spock, and Star Trek IV: The Voyage Home. She is also responsible for giving Ensign Sulu of the original series his first name, Hikaru—until then, he'd simply been "Sulu". She also wrote an early Star Wars Legends novel, The Crystal Star.

Her novel The Moon and the Sun was adapted for a movie The Kings Daughter, which became trapped in The Shelf of Movie Languishment.

In addition to writing, she was also co-editor of an anthology of feminist SF called Aurora: Beyond Equality, and a founder of the west coast branch of the famous Clarion writers workshop. Robert A. Heinlein included her in the dedications in his novel Friday.

In her spare time, she contributed to the Hyperbolic Crochet Coral Reef