Western Animation / An American Tail: The Mystery of the Night Monster 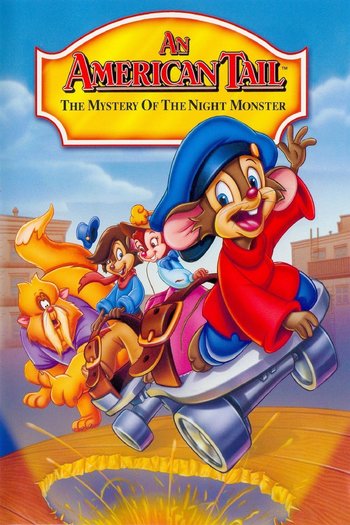 An American Tail: The Mystery of the Night Monster is the 4th and thus far final installment in the An American Tail franchise. This film was released on December 9, 1999 in Germany and July 25, 2000 in the US.

In it, Fievel Mousekewitz is plagued by nightmares after news spreads of a vicious Night Monster terrorizing Manhattan and kidnapping mice. Tanya, who now works for the Daily Nibbler Newspaper, is forced to take Fievel to work with her in an effort to alleviate his fears. On the way they meet Nellie Brie, a famous undercover reporter. Her boss, Reed Daley, is constantly at odds with her, and as a bit of a prank he assigns Fievel to be her assistant and artist, putting him to work drawing interpretations of the Night Monster. Needless to say this does nothing to calm his fears, and he ends up with more sleepless nights. However, as Nellie attempts to get to the bottom of the mystery, clues begin to point toward an eccentric French poodle who recently escaped her owner and has taken to telling fortunes in the street, Madame Mousey, as the main suspect behind the disappearances.

The direct-to-video film uses many of the same character designs from the previous film, as well as many of the same voice actors. Like the film preceding it, The Mystery of the Night Monster takes place back in New York, putting the canonicity of An American Tail: Fievel Goes West into question.