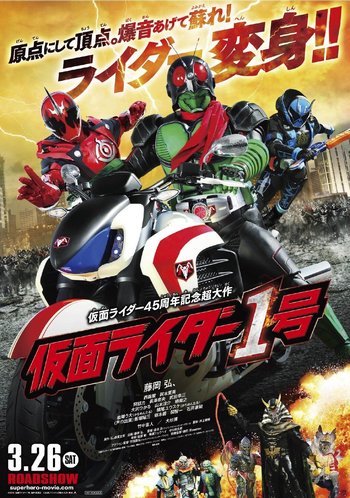 For Life, Love, and Future.
Advertisement:

Kamen Rider 1 is the 2016 Kamen Rider spring crossover movie. It features the return of Hiroshi Fujioka as Takeshi Hongo, this time in a main character capacity unlike his last appearance in Heisei Rider vs. Showa Rider: Kamen Rider Taisen feat. Super Sentai.

After many years fighting Shocker around the world, Hongo returns to Japan to recruit Takeru Tenkuji and Makoto Fukami, Kamen Riders Ghost and Specter, after Shocker's newest incarnation goes after Mayu Tachibana, Tobei Tachibana's granddaughter, who seems to be connected to their plans to resurrect Ambassador Hell. However, the years have not been kind to Hongo, whose cyborg body is starting to become weaker. There is also a new group known as Nova Shocker, an organization splintered from Shocker and causing an internal power struggle with the Kamen Riders caught in the crossfire.

Interestingly, while this will be released at the same time the usual Super Hero Taisen films were released (two weeks after the newest installment of Pretty Cure All Stars), this film marks the first time that there are no signs of any of the other Kamen Riders from either era, nor is there an appearance from the contemporary Super Sentai, Doubutsu Sentai Zyuohger.

Kamen Rider 1 has examples of the tropes:

"Riders will always be by your side.

They'll always be with  you no matter what

Riders will still  be there for you."