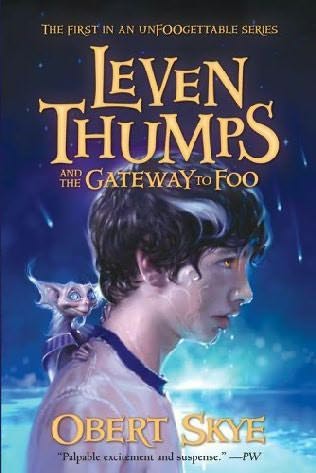 A series of novels by Obert Skye.

It begins with fourteen-year-old Leven Thumps living an awful life with his step aunt Addy and her husband Terry Graph in a trailer home at Burnt Culvert, Oklahoma - a town named after the supernatural fire that blazed there a little over a decade ago. One day, Clover, a Sycophant, reveals himself. Clover tells Leven that he's been watching over him all his life, usually invisible. He and Leven have got to find the gateway into the world called Foo and then destroy that gateway. Foo is Clover's world, the place that makes dreams possible.

Humans who get trapped in Foo are called Nits, and one Nit named Sabine has taken over, leading his armies in search of the gateway. If they find the gateway, they'll lead everyone into reality, Foo will empty out and the lack of dreams will destroy humanity. Although Clover's former "burn" (or master) knew all about the gateway and took him through it about fourteen years ago, Clover never got to see it and doesn't know where it is. A Lithen named Geth who knows where the gateway is had been captured and transformed into a seed by Sabine, but Clover knows that his burn got the seed and planted in in reality. Thus Leven and Clover set out to find Geth so that they can enter Foo and destroy the only way out.

There are Five Books:

Professor Winsnicker's Book of Proper Etiquette for Well-Mannered Sycophants is a side-book that takes place prior to the series.

Leven Thumps is followed by a sequel trilogy called Beyond Foo

This Series Contains Examples Of