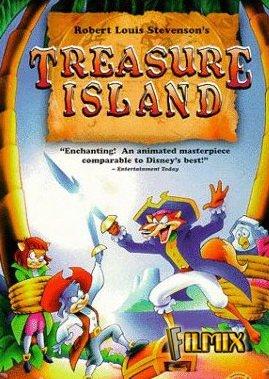 Jim Hawkins' father, having been issued a death threat by pirates over the ownership of a treasure map, hands it to his son so he may search for the treasure and thus keep it out of the hands of the ruthless Long John Silver. With the assistance of old sea dog (literally) Captain Smollett, Jim gathers a crew and finds his way to mysterious island, albeit with Long John's crew at his tail and the island's numerous supernatural forces hindering their search.

Alongside its Funny Animal premise, the show deviates greatly from the novel due to the heavy use of magical elements and a few extra cast additions (most notably Jane, a young hostage-turned-Mook of Silver's that joins Jim on his quest). Noted for its high quality animation, and a rather notable voice cast (including Dawn French and Hugh Laurie).

Not to be confused with the anime Animal Treasure Island, a similar loosely based Funny Animal adaptation.