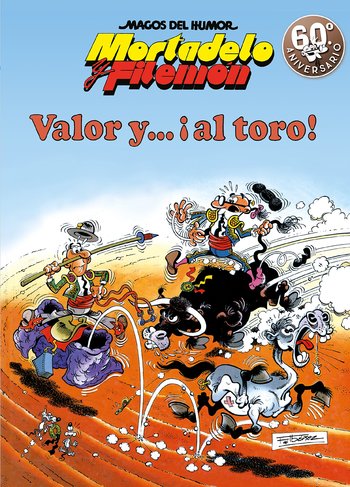 Valor y... ¡al toro! (literally, "Valor and... to the bull!") is a 1970 comic from the Spanish series Mortadelo y Filemón, by Francisco Ibáñez. It was series's second long story after El Sulfato Atómico, though it ended being published the fourth due to production troubles.
Advertisement:

Secret agents Mortadelo and Filemón are called again by the TIA to execute a difficult mission. The criminal gang of the Rata, led by the evil Professor Apolonio, has stolen a batch of plans of a high-tech defense project from the Center of Agrounautical Research of the Cosmos, which will derail the project's development and endanger the entire country if not recovered. The two agents intercept the gang in route to leaving the country by cruiser, but in the process they discover the plans are guarded in a perilous recipient - the horn of a huge Spanish fighting bull.

It was penned by Ibáñez in a midst of heavy negotiations with its publisher, the infamous Editorial Bruguera, and has a lot of behind-the-scenes stories. The comic book was originally unrelated to Mortadelo y Filemón, instead being the first installment of what was essentially a Captain Ersatz series meant to be sold to another publisher, but when the troubles were solved, Ibáñez re-adapted it into M&F. The planned dopplegangers, Lentejo and Fideíno, can still be seen in the original manuscript of the first seven pages when looked at from the back, surviving behind the stickers used to cover them up with Mortadelo and Filemón.