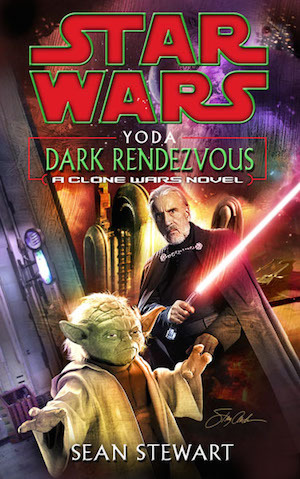 "Tomorrow, go you must, into the darkness between the stars. But home always will this place be. If ever lost you are, look back into this garden. A candle will I light, for you to find your way home."
— Yoda, to young Dooku
Advertisement:

Yoda: Dark Rendezvous is a Star Wars Legends novel by Sean Stewart. Thirty months after the Battle of Geonosis, Count Dooku sends a message to Master Yoda, claiming to be tired of a war that has spun out of control and caused untold devastation to the galaxy. Dooku offers to meet with Yoda in person to negotiate an end to the conflict, and despite the likelihood of treachery, Yoda decides that the possibility of ending the war and redeeming his former apprentice is worth the risk.

The book delves into the complex relationship between Dooku and Yoda, as well as some of the philosophical differences between the Force and its dark side. There's also a related B-plot that involves two young Jedi apprentices named Scout and Whie Malreaux, both of whom have their own struggles to deal with even as they and their Masters are assigned to join Yoda's titular dark rendezvous with Dooku on the planet Vjun.

Also, despite the title, there are a number of light-hearted and humorous scenes in the book involving "goofball Yoda," which harken back to the scene in The Empire Strikes Back when Luke Skywalker first meets Yoda.