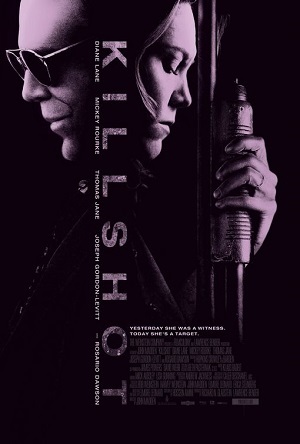 Killshot is a 2008 American crime thriller film directed by John Madden, starring Diane Lane, Thomas Jane, Mickey Rourke and Joseph Gordon-Levitt. It is based on the 1989 novel of the same name by Elmore Leonard.

Carmen and Wayne Colson live a quiet, suburban life. Carmen (Diane Lane) is a realtor while Wayne (Thomas Jane) is an ironworker. Suddenly everything is violently changed when they stumble upon an extortion plot hatched by two crooks, Armand "Blackbird" (Mickey Rourke) Degas and his partner Richie Nix (Joseph Gordon-Levitt). While Richie is unstable and impatient, the Blackbird is calm and collected. After Wayne forces the two away with a Sleever Bar, the criminals decide to exact vengeance on the Colsons…