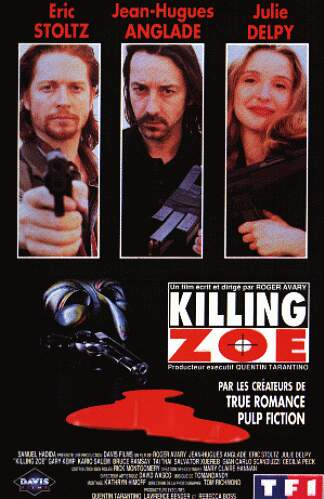 The death of life ("Zoe" is the Latin (actually Greek) word meaning "life."
Zed: I can't pee on you?
Zoe: No!
Advertisement:

Eric Stoltz plays Zed, an American safe-cracker in Paris to see his childhood friend Eric. After an interesting afternoon with Zoe, a call-girl (certainly not a prostitute), Eric shows up and takes Zed out to "live life." This is done by shooting up with Zed, and then telling him that he (Eric) is HIV positive. The following day is Bastille Day, and every bank except one is closed. Guess what happens. They rob the place, Eric goes crazy (well, crazier), the call-girl works there, and every piece of shit manages to hit the fan.

It's gone down in history as a lesser Quentin Tarantino film, but his only involvement was as executive producer. Similarities between Killing Zoe and other Tarantino films do exist, but that is because Roger Avary had a hand in writing those scripts. Some called Tarantino out on reusing a call-girl character, as he had already done True Romance, but the first draft of True Romance was written by Roger Avary. The true difference between Killing Zoe and the Tarantino's films is the nihilism. Avary writes villains who are selfish monsters and heroes that are nothing but apathetic. Does it come as a shock to anyone that the man's next film would be an adaptation of a Bret Easton Ellis's The Rulesof Attraction?