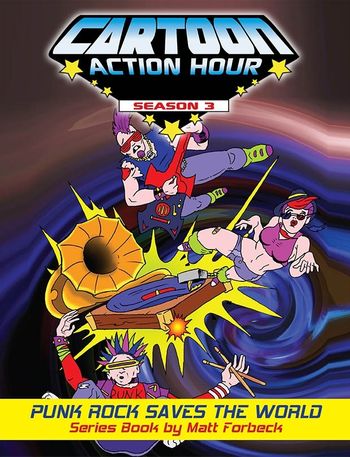 "Traveling Through Time With Three Chords and the Truth!"
Advertisement:

Matt Forbeck's Punk Rock Saves the World is one of the series books from Cartoon Action Hour: Season 3. It combines the Band Toon and Time Travel tropes, and has a lot of fun with both of them along the way.

The premise: a Punk Rock band called the Punks stumbles on a gigantic gramophone that turns out to be a disguised Time Machine created by Nikola Tesla. It causes them to become Unstuck in Time, where they must Set Right What Once Went Wrong before returning to the present. Invariably, the Punks' adventures involve the history of recorded music, as they encounter "Disco Dastards", "Endless Elvises", a rival band called the Glam Girls, and Emile Berliner

, the inventor of the phonograph.

The main villains seem to be a Corrupt Corporate Executive called "The Man" (aka John Smith) and his Mooks, "the Suits", but The Man Behind the Man is actually Tesla's old Rival, Thomas Edison, who is out to become "the greatest inventor of his time"—even if he has to steal his inventions from Tesla to make it happen. Edison is using the Punks to locate Tesla, who is hiding somewhere in the timestream.

Punk Rock Tropes Save the World: