Literature / The Ocean at the End of the Lane 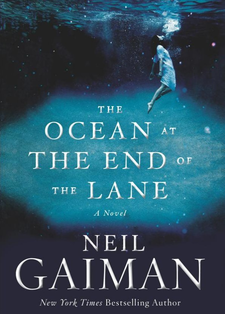 The Ocean at the End of the Lane is a 2013 dark fantasy book by Neil Gaiman.

A middle-aged man returns to his childhood home in Sussex, England, for a funeral. While there, he remembers when he was seven years old and when he walked to the house at the end of the lane where the Hempstocks lived: Lettie, who was eleven years old, her mother Ginnie, and her grandmother, Old Mrs. Hempstock.

The Hempstocks aren't normal, however. Lettie is eleven, but she's been eleven for a very long time, and she claims the pond behind their house is actually an ocean. And Old Mrs. Hempstock is very old. Older than the universe, p'raps.

But something dark had been unleashed. Something old and terrible. Something only Lettie Hempstock could help stop.